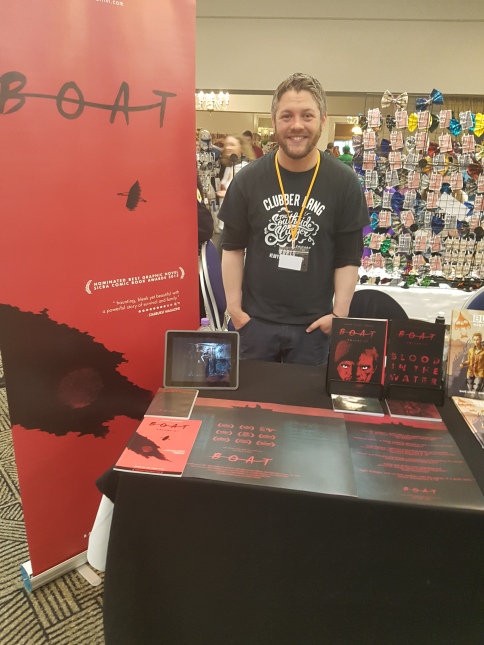 “I have been interested in comics from a very early age, the idea of graphic novels based on films or inspired by films always interested me.” Film-maker David Lumsden says on turning his short film ‘Boat’, into a graphic novel.

David is an Edinburgh based film writer and director, who graduated from Edinburgh College of Art with a Masters degree in film. His achievements include award winning short films and commercials.

I had the pleasure of meeting David back in May at Granite City Comic Con, where I also got the chance to check out his graphic novel of ‘Boat’. From the onset, David is incredibly warm and enthusiastic to talk to. Out of all the work at GCCC, it was ‘Boat’ that peaked my interest for many reasons; One of them being that it didn’t start out as a graphic novel, but as a short film that was both written and directed by David.

For those who don’t know, ‘Boat’ is an award winning short film, that is set in a post-apocalyptic world where the ocean as reclaimed the world, fully submerging it. The award winning graphic novel adaptation has also gone on to become a critically acclaimed series, with Volume 3 on the way.

In our interview we discuss all things about ‘Boat’, and how it transitioned from screen to print.

“So, first of all could you tell me a little bit about yourself and what you do?”

Hey, so I am a writer/director based in Edinburgh, I graduated from the Edinburgh College of Art with a Masters degree in film in 2007 and since then I have been directing commercials, behind the scenes documentaries and short films. Boat is a short film and graphic novel that is based in a post-apocalyptic Scotland. The story follows the main character ‘Charlie’ as he tries to survive in this dark new world.

“Your graphic novel ‘Boat’ is based on the short film of the same name, what made you want to create a graphic novel of the film?”

I have been interested in comics from a very early age, the idea of graphic novels based on films or inspired by films always interested me. When I was growing up it gave me a chance to get more information on the film or a new perspective on a film I enjoyed. The comics would always flesh out the story more or give you an alternative look into the world. When I started making films I wanted to do something similar. The storyboarding process is a lot of fun and when we were in pre production on ‘Boat’ I loved the look of the boards and I thought we could create a graphic novel out of them. The film took a while to complete as there were a lot of VFX shots in the film and this gave us a chance to develop the graphic novel while we were completing the film.

“Would you say you faced any challenges converting the film into a graphic novel?”

Mainly time and budget. We didn’t have the biggest budget and I had no idea what it took to make a graphic novel, so it was a mixture of trial and error. I thought it would be an easy process but making sure we had all the design specs right, from page sizes to lettering it was tough to complete. This meant we went back and forward on a lot of technical aspects but it was a massive learning experience that, looking back, was definitely worth it because it gave me the opportunity to work with really talented artists.

“The post-apocalyptic genre is becoming a growing narrative within comics, what provided you with the inspiration for the story of both the film and comic?”

I love the genre and I wanted to do something really different with our short film. The idea of making a post apocalyptic short came from a chat with a local Director of Photography who told me he had seen Edinburgh filmed in every way and that it wouldn’t surprise him anymore. So it got me thinking about ways in which Edinburgh hasn’t been seen, that is where the concept imagery of a flooded Edinburgh came from and the project grew from there. I just wanted to create something that was unique as we are used to seeing iconic landmarks from around the world being destroyed in big budget films. I wanted to do it on an intimate level with a city I had such an attachment too.

“Is the comic a straight adaptation of the short film? Or have you made any changes?”

“The story takes place in the submerged city of Edinburgh. Was there a particular reason why you chose Edinburgh as the stories setting?”

I chose Edinburgh because it’s the city I live in and I have always thought it is iconic and beautiful. The story of Boat is really about getting to Edinburgh, Charlie has this goal that has been embedded in him from childhood that a castle is a safe place and to survive in this world he needs to find ‘his castle’. The story is about him achieving that goal. I wanted to include an element that it may not be the safe place he thought it would be and to leave the story slightly open ended. The viewer is left in the same situation as the main character as we discover he isn’t alone but are left wondering if this a good thing? It’s left on the idea of ‘Hope’ that this is his safe place. Book 2 picks up at the very moment the film ends so you get to see pretty quickly what is in store for the main character.

“The artwork within the comics are very dark, was this an intentional move to represent the theme of the story?”

It was definitely intentional, I was very tempted to do it in colour but it didn’t feel right for our book. Black and white really worked for this world and it’s characters. It is a dark story in a really desaturated world and I think the artwork and lettering reflect that.

“In Volume 1 we are introduced to a father and son who have survival rules. Were these rules an important element for the story that you always had in mind?”

The rules were something which are important in the film and in book 1. They are what the main character uses to stay sane. He uses them to keep some form of consistency in this mad world. The father is losing his mind and he thinks that he needs to create these rules to keep his son safe if he isn’t around. These rules are an important part later on in the story but I don’t want to give too much away. 🙂

“In Volume 2 we are introduced to various different characters, and I was just wondering if these characters will have a bigger part to play in future installments in the series? Or possibly even get a spin off story?”

I wanted to include more characters in the story but it came back to what I could do in a short film and with a small budget. The idea was to create an interest with the film, then build an audience and continue the story in the graphic novels adding all these characters. The new characters in ‘No land’ are hopefully just as interesting for the reader. I didn’t want to create a back story for all of them, I like that we just arrive at a point in their particular stories but we do reveal more about these characters as they have a large part in Charlie’s story moving forward. I think there are some really cool story arcs coming up that I’m looking forward to seeing on the page.

“In both volumes, the story narrative switches between past and present. What made you adopt this approach to telling the story?”

The ‘Then’ & ‘Now’ narrative was a big part of the film. The big reveal at the end of the film is a little trick on the audience as they believe they are following one character then it all gets flipped around on them. The ‘Then and Now’ continues in the books as we get to reveal both parts of Charlie’s story and how his past affects his present. It’s a challenge to tell both stories simultaneously as I want the reader to be surprised in both timelines. It is challenging but a lot of fun. I think that’s why I wanted to use this technique to tell the story. I really enjoyed films that played around with flashbacks or unusual narrative structures like ‘Memento’ or ‘The Crow’ graphic novel, the flash backs were always used in an interesting way and didn’t derail the story. Hopefully we aren’t confusing people too much!

“Lastly, is there anything you can tell me about volume 3? And do you have any other future projects that are in development?”

Boat V3: Blood in the Water has been a big challenge, we were very lucky to receive funding from Creative Scotland’s Open Project fund and that has really helped and allowed us to go all out and really take the story to another level. With the funding we have been able to deliver a longer story that really opens up the world and develop its characters. It will be available in July 2017 and I’m hoping it will go down well with our readers.

In terms of other projects I have two other graphic novels and films in development which I am hoping to release this year. They are very different from Boat and I am looking forward to putting them out there.