This past weekend saw local comic book store Asylum continue their support of independent comic creatives by taking part in Small Press Day 2019. Held this Saturday the 13th of July, the store played host to a couple of talented independent graphic novelists.

This year marks the fourth ever Small Press Day since the inaugural event began in 2016. Designed to set the spotlight on those within the small press community, Small Press Day has grown in the past few years and brings together a wide variety of artists, authors, publishers and fans alike to celebrate the achievements of those within self-publishing and micro-publishing community.

When it comes to supporting the small press community no one does it better than Asylum. Since the stores inception nearly 20 years ago, Asylum have been no stranger to supporting talented local, and not so local, comic creatives. Not only have they taken part in Small Press Day before, but Asylum also champion the works of those within the small press community by providing them with a platform to showcase their work to the public through a range of events during the year. 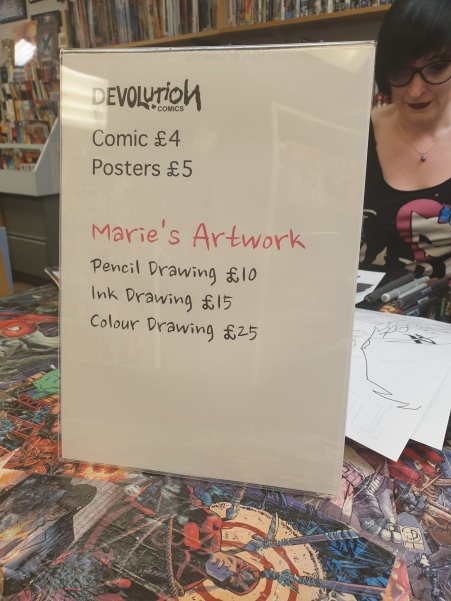 This year saw the store host two immensely talented comic book creators; Maria Flower and Marie DuGuid of Devolution Comics. Both of these women are a shining example of the diverse work to be found within the local Aberdeen comic scene.

For Maria Flower, this was her first time taking part in Small Press Day since the release of her fantastic debut, ‘A Cinema Near You’. I had the pleasure of meeting Maria earlier on in the year. Since then Maria has published ‘Grandmothers’ Tales’, which is a collaboration with two other writers who were also shortlisted for the Laydeez Do Comics Awards this year.

Marie Duguid is also another comic creative that I have had the pleasure of chatting with. If any of you read my post on Asylums’ Small Press Day last year you will notice this is where I first got to sit down and chat with Marie. This year she was back with some more phenomenal sketch work, alongside issues of her graphic novel ‘Dia’, which she told me follows ‘the story of a woman on the path to revenge’, which I personally think sounds like something I will enjoy. Marie also commented that there is more for ‘Dia’ in the pipeline, so stay tuned!

As mentioned earlier, Asylum have been supporting the independent comic scene for nearly 20 years now, and they will continue to support and provide a platform for those within the scene for many more years to come.

Asylum owner, and my good friend, Mike McLean commented, ‘It’s always nice to see everyone within the creative community come together’. For me, it is always a delight to see those within the small press community come together and get the spotlight shone on them. Particularly in Aberdeen, where there is an incredible amount of local talented comic creators whose work is deserving of so much more recognition. With that in mind I will continue to support Small Press Day, and those involved, in the many years to come.